You Are Here: Home → 14 Of The Worst Cars Ever Shown At The Detroit Auto Show 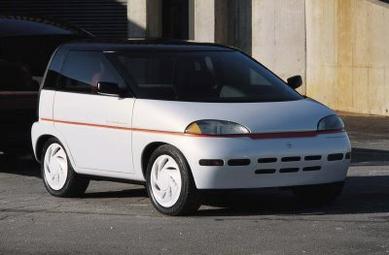 Photo by “89plymouth-voyager3 2” by Source. Licensed under Fair use via Wikipedia.

This was an insane looking vehicle when it was unveiled at the Detroit auto show in 1990. It’s almost like Plymouth didn’t know what they wanted to build so they just started putting pieces together then changed their minds halfway through. It looks like it started as a minivan, but then they wanted to add a truck bed on it. After adding the truck bed they chose to put a massive cab on the bed to seal it off and turn it back into a crazy looking van. They added in the extra axle in the back for good measure and ended up with a ridiculous vehicle. The front half was a front wheel drive commuter car, that had wheels that could drop down like airplane landing gears and was able to drive away from the back half. It never went into production thankfully.